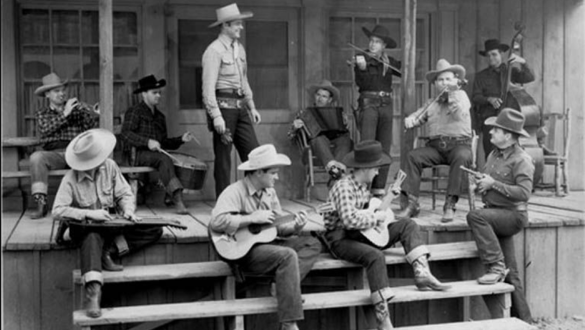 Firsts make history: first to run a four-minute mile; first to climb Mt. Everest; first in space.  The world offers special praise to anyone who accomplishes something noteworthy first, even if it’s later done better.  But what if you were first at something and the world never noticed, partly because it’s something you weren’t known to do at all?  I may have stumbled onto one such first.

Who recorded the first electric guitar solo?  Charlie Christian (1916-1942) is widely acknowledged to have been the first influential electric guitarist, but by the time Benny Goodman hired him others had recorded with electric guitars.  The pre Charlie Christian era of electric guitar is murky and rife with misinformation.  For years Eddie Durham’s playing on “Hittin’ the Bottle,” recorded Sept. 30, 1935 with the Jimmie Lunceford Orchestra, was cited as the first electric guitar solo on record.  It’s even opened some compilations of early electric guitar recordings.  Trouble is, anyone who has played both will recognize that Durham (1906-1987) played a resonator guitar on that recording, not an electric.  The Los Angeles-based National String Instrument Corporation introduced metal-bodied resonator guitars in 1927.  They were designed to make guitars louder, but their bark depended on metal cones, not magnetic pickups and amplifiers.  It sounds like Durham played one of National’s single cone guitars, possibly its Duolian model.  It sounds nothing like an electrically amped guitar.

Another contender for first recorded electric guitar soloist is George Barnes (1921-1977).  The Wikipedia entry on Barnes proclaims: “On March 1, 1938, he recorded the songs `Sweetheart Land’ and `It’s a Lowdown Dirty Shame’ with blues guitarist Big Bill Broonzy, and in doing so he became the first person to make a record on electric guitar, fifteen days before Eddie Durham recorded on electric guitar with the Kansas City Five.”

Barnes, then only sixteen, was certainly precocious and damn good.  And The Kansas City Five session referenced in his Wikipedia entry showcases Durham on a very different instrument than “Hittin’ the Bottle,” this one clearly electric.

But neither is the earliest Spanish (as opposed to Hawaiian or steel) electric guitar on record.  Some claim that distinction for Gage Brewer (1904-1985), a Wichita, Kansas-based guitarist-bandleader who began performing in 1932 with one of the first Spanish electrics made by George Beauchamp, a guitarist-designer who had played a role in the creation of Nationals before moving on to design electrics for the company that would become Rickenbacker.  The one recording of Brewer playing both Hawaiian and Spanish style guitars is described thus on YouTube:

“Gage Brewer and orchestra perform the Marion Harris hit `A Good Man is Hard to Find.’  This 78-rpm record was not made for sale.  It was simply a recording for artist use and/or advertising through radio broadcast.  It is likely the earliest recording featuring both the electrically amplified Hawaiian and Spanish (standard) guitars (both introduced in 1932).  The recording was made in Denver, Colorado.  The address listed on the record label refers to the studio’s 1936 location, however it is overlaid on an earlier label, possibly suggesting an even earlier production date.”

This is historically interesting but problematic: the recording date is unknown, for one.  Also this was not a commercial recording (both the sound quality and performance argue that it wouldn’t have been issued if it had been), so it had no impact.

Let me introduce my dark horse candidate in the race for first recorded electric guitar solo.  He appeared unexpectedly in a search for material for my April 28th radio show, Roots Music & Beyond, on KPFK, 90.7 FM, Los Angeles.  The last Saturday in April is annually celebrated as Bob Wills Day in the west Texas town of Turkey, which gives me a good excuse to play some Western Swing.  In searching for Wills recordings I went back to the first recording session of his band the Texas Playboys.  It took place in Dallas on Sept. 23, 1935.  There were no recording studios in Dallas: Wills’ manager O.W. Mayo recalled the session taking place in “an upstairs Buick building.”  Legend has it that producer Art Satherley was expecting a more genteel country string band and was so demonstrably shocked by the dozen Playboys with their drums and horns that Wills threatened to walk out before the session began.  But record they did, and on the session’s second performance Wills shouts:  “Take it away, Mr. Leon!  Play that guitar now.”  He’s referring to Leon McAuliffe, the first steel player with the Playboys.  But the solo is on a `Spanish neck,’ not a steel guitar.  It’s an electric guitar solo and an uncanny precursor of the `dirty’ proto-rock sound Junior Barnard got with the Playboys a decade later.

“Get With It” throbs with a rock-solid rhythm section and offers an alto sax solo—this was a country record?  Wills once famously said, “Don’t lump us in with them hillbilly outfits,” and it’s clear that what would later be called Western Swing was initially a kind of regional jazz, first and foremost dance music.

But about that electric guitar solo—even if Durham had played an electric on “Hittin’ the Bottle,” McAuliffe beat him onto record by a week.  “Get With It” isn’t one of the better-known Texas Playboys performances, but it’s not an ultra obscure rarity, either.  You could say it’s been hiding in plain sight for 82 years now.  So why has no one fingered it before as offering the first electric guitar solo on record?

There’s a possible whiff of snobbery at work—if early electrics were deemed the province of jazz players, jazz buffs tend to be dismissive of Western Swing.  Why look there?  Then there’s the problem of Leon McAuliffe (1917-1988)—he may have doubled on both electric steel and Spanish guitars in the Playboys’ early days, but after their 1936 recording of “Steel Guitar Rag” became a hit, he was forever identified with the steel guitar.  Who even knew he had ever played Spanish guitar, let alone soloed on electric?  Who would expect a famous steel guitarist to be a trailblazer for Les Paul and Jimi Hendrix and everyone else who ever plugged in?  The whole thing’s absurd.

Except there’s the recorded evidence on the joyously drunk-and-disorderly sounding “Get With It”:  “Take it away, Mr. Leon!  Play that guitar now.”  And he does, for more than half a minute.  He vamps with that early tube amp distortion and proves he was no slouch with jazzy chords or single string riffs, either.  Had the steel guitar not been the hotter property in Wills’ band at the time, or had the great guitarist-arranger Eldon Shamblin not joined the Playboys in 1938, McAuliffe might have recorded more Spanish electric solos and perhaps be better remembered for that first one.

Odds are he never gave his overlooked role in electric guitar history a second thought.  Drafted in 1942, McAuliffe returned to music after WWII, fronting his own band, the Cimarron Boys, with whom he toured and recorded for years.  Popular in Vegas, McAuliffe did well enough to buy his own radio station, KAMO, in Rogers, Arkansas.  In his later years he became de facto leader in sundry reunion appearances by surviving Texas Playboys.

In 1984 I attended perhaps the biggest one of all in Tulsa, the 50th anniversary Texas Playboys reunion concert.  The Tulsa Convention Center offered 48 former Wills sidemen crowding the stage.  The night before, there was an informal rehearsal that turned into a dance.  Everyone was having a swingin’ swell time till the drummer, Bill Mounce, slumped over his drum kit.  Medics came and took him away on a stretcher.  Then after a respectful spell the band picked up its instruments, a new drummer sat in Mounce’s chair, and people commenced dancing again.  During a break I asked McAuliffe if there was any word about Mounce’s condition.  He had suffered a massive heart attack. “He died with his boots on,” McAuliffe said, doing what he loved.

I had posted a query prior to writing the above regarding McAuliffe’s place in the early electric pecking order to Facebook’s pre War electric guitar discussion group.  After I had written my column, country music historian Kevin Coffey posted the following response.  Thanks, Kevin, for crushing my illusions about making an original discovery!  But at least it’s a `first’ worth rediscovering as the town of Turkey, Texas gears up for its annual Bob Wills Day celebration on April 28th.

Kevin Coffey – “I was out of town when you posted this, so forgive the late reply.  If you have access to the 1st Bob Wills boxset on Bear Family, Rich Kienzle covered this subject.  As far as I know, Rich was the first person to notice that McAuliffe was playing an amplified standard guitar on a number of tracks on the first Wills session: not just “Get With it,” but other tracks like “Who Walks In When I Walk Out” “Oklahoma Rag” “I Can’t Be Satisfied” and “Sittin’ On Top of the World” all feature Leon on standard rather than steel.  McAuliffe did address the issue, too, in at least one interview before his death, if I recall but didn’t specifically mention recordings.  But as far as I know Rich was the only person to detail this in print.  That box set came out almost 20 years ago now — but it still is not widely known.  My memory is that Leon decided to concentrate on steel after this first session, possibly partly out of frustration because of the several “clams” he hit on standard solos that were issued, for example he goes “off” on “Who Walks In” and “Oklahoma Rag.”  I think he did occasionally play standard rhythm guitar or bass on fiddle tunes after this, but the ’35 session is the only one that features him on electric standard.  I don’t know, but I think it’s likely that this was the first commercial recording of an electric standard.  Here is an interesting brief discussion of the subject by Fernando Ortiz de Urbina.”

Join Mark Humphrey the 4th Saturday of most months for a mix of music on KPFK’s Roots Music & Beyond, Saturdays 6-8 a.m. 90.7 fm. The show is archived for two weeks after broadcast at KPFK’s website.
Previous Quacking Good Guitar
Next New Orleans Piano Players